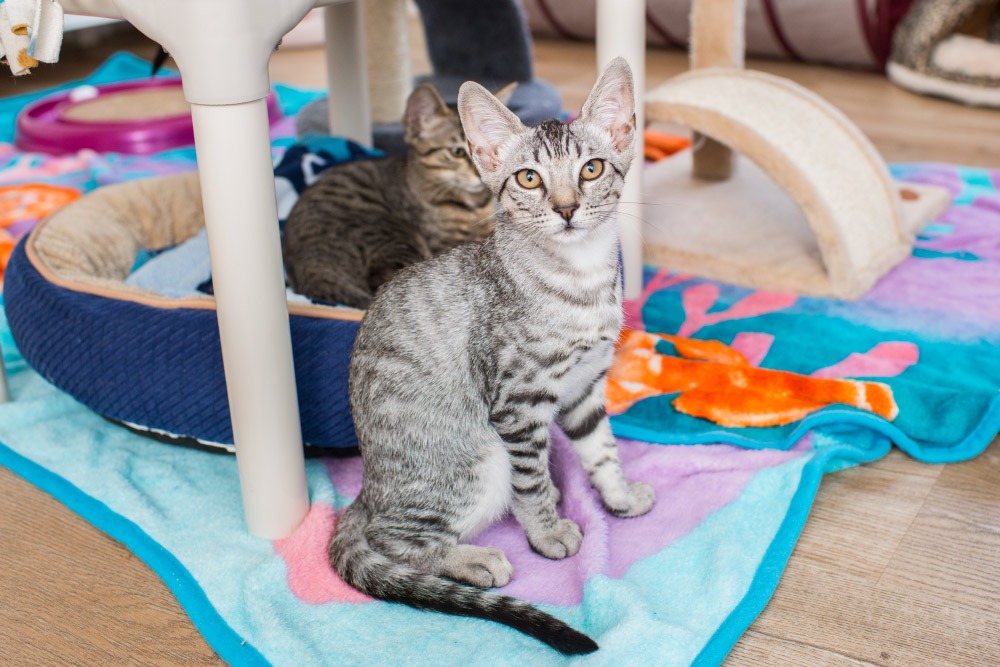 When we talk about keeping cats healthy here, it includes anybody — kitten, teen or cat — over four months of age. If you just adopted a new kitten or cat, remember that even though they are healthy, they’ve had a very stressful life lately and most are just out of the pound. Just like us, after extreme stress like final exams or a big presentation at work, it’s not until we’re done and relaxing at home that we come down with a cold or the flu. The same applies to the cats. Here’s what you need to know and do.

Bringing the Cat Into Your House

This is why we require a seven-day isolation period, which sounds far more foreboding than it is. Keep the new kitten or cat in a bathroom or spare room, separate from your other cats. Even if you don’t have other cats, if the kitty should break with a cold, you don’t want the rest of your house contaminated. The bathroom works great because you’re in there a lot on, well… your own business which involves significant “sit-down” time. Plenty of opportunity to socialize with the kitty and love it up!

Why seven days? Because most cold and flu viruses have a 3-6 day incubation period. So, if your cat or kitten doesn’t show signs of illness with seven days, it’s probably free of anything it would have picked up at the shelter, and you can allow it to start mingling with the rest of the household.

Another reason for isolating your new cat or kitten is for socialization purposes. It sounds strange that we would want to keep cats apart so they get along better, but it is absolutely true. When cats first meet, they take an mental picture of the other cats response. If their first meeting includes arching, hissing, and spitting, it may not be pretty for the long haul. They seem to carry that mental image of the other cat around and hold a grudge, sometimes for life. It’s as if each time they come into contact with the newer cat, they pull out the picture in their mind — even if the newer cat is being nice and calm at the moment — and they say “See, I don’t like ya and I never did!”

To get started on a better note, with your new cat isolated in the bathroom or bedroom, let the cats sniff each other under the door as a form of first introduction. This way they can get used to each other’s smell. You will have a far greater chance of getting them to accept each other. They may hiss and spit at each other through the crack under the door, but since they can’t see each other, they don’t take this “grudge” picture. Usually within the seven day isolation period, they will stop acting aggressively towards each other under the door. That’s when you can let the new cat out so they can see each other, since they have already gotten use to each other’s smell. If either cat starts acting cranky, just shut the door and try again later. It’s that simple.

This technique is especially helpful if you plan to foster different, sequential cats. If each time you bring a new cat into the household and the new cats are always spitting, hissy buttheads (in your resident cat’s opinion), your resident cat is going to resent any new visitor and could get stressed out. So, you want to make sure your resident cat feels like:

If these introductions go well, resident cats usually adopt a nonchalant attitude to these new invaders and simply ignore them. Which is exactly what you want. If the cats want to make friends and be buds, that’s cool — but most older cats will simply act disdainful and ignore the newcomers.

Feeding should be twice daily, with the food left down for about an hour. For example, put the food down when you first get up, pick it up before you go to work, and then do the same around dinner time. The benefit of twice-daily feedings over free-feed systems (leaving the food out all the time) is that you absolutely know what the cat’s appetite is like every twelve hours. Most cats will run to the bowl, eager to eat. This is how you can gauge its appetite very carefully.

If we allow free-feeding, it can takes sometimes days to figure out whether the kitty isn’t eating enough — which is important, since cats hide their illness very well and you want to catch problems as early as they arise.

This may seem basic, but the water bowl should be cleaned and re-filled with fresh water twice daily.

Some foster cats may be a tad, shall we say… eccentric. Some cats will only drink from drinking glasses. (Human-type glasses and sometimes only if it has ice and dash of lemon!) Some like to only drink from running faucets. To these individuals, we usually cave…and cater. Just be sure everybody has the fresh water they crave, at least twice daily.

The litter box should be scooped twice daily. This way you can check stool consistency and be sure the kitty is urinating appropriate amounts. Most cats will defecate once to twice daily and urinate 2–3 times per day. The amount of urine should be about the same size and color each time. If the cat is urinating frequently, either large or small amounts, you may want to consult your vet.

If the cat ever cries, strains or spends an inordinate amount of time in the litter box, your vet must be notified IMMEDIATELY. Especially with male cats. If you use high-quality food, urinary tract problems are rare, but they can happen so you must be alert for them.

Anything other than normal brown, formed poop and nice yellow urine should be noted and addressed.

Warning Signs to Watch For

If the kitten or cat does any of these things, even once, you need to be concerned. In most instances, it will be nothing… but again, we always want to be on the safe side.

In any of those instances, you’ll want to make an appointment and quickly get your kitten or cat in to see your veterinarian.

Consider making a donation to us in return. $5, $10, $25… whatever you feel this info is worth. Every dollar helps!

Back to Cat Care