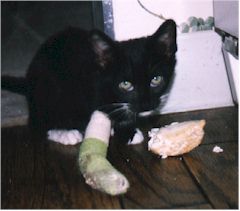 So there I was, a spritely young kitten of just five weeks, going about my business…when I got attacked by one of those big, fast, metal monsters. You people call them cars, but we cats call them Public Enemy Number One. Would you believe they didn’t even stop to see if I was alright?

Someone found me, rolling around on Fallbrook Avenue in Woodland Hills (I don’t remember that part…and I’m thankful for it). They brought me to Kitten Rescue, who noticed that my right front leg was just kinda flopping around. Whoosh…off to VCA Parkwood I went. That’s where they told me I had nerve damage, right at the elbow. They were hoping that damage would repair itself, so they put me in a cast and stayed optimistic.

Back then, I still hadn’t made up my mind about you humans. I had this thing about running away and being timid…that’s how I got my name, because I was always “scooting” into the shadows. Can you blame me? I’d been through a whole heck of a lot for such a small guy. The cast didn’t stop me from being a normal kitten, like getting into trouble, playing with other fosters, and discovering the wonderful world of citrus, as you can see here. 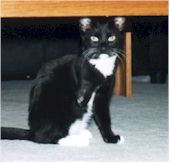 Alas, after two months of that itchy cast, they realized that I was never going to get movement back in my leg. It was time to amputate, they said. I was only four months old…and to make matters worse, they cut off two other things that I liked having…but I won’t go into that now. It’s a sore subject.

It took a little bit of time to get used to only having three legs, but we cats are survivors. We make things work. Here’s a picture of me shortly after the big operation. As you can see, I kept my cool. As a cat, it’s my job. That was back in August of 1997, and now I’m proud to be Kitten Rescue’s official mascot. I guess they chose me because I represent what Kitten Rescue is all about…taking homeless cats who have no future, and giving them one. A darn good one, at that. I sure like mine. 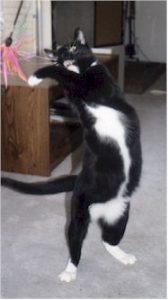 These days, I’m as social as anyone and love to be petted. They say I have one of the loudest purrs they’ve ever heard.

And here’s proof that three legs — or any other disability or illness — doesn’t keep a cat from being, well, a cat. I can jump and pounce and cuddle and love as good as anyone. I hope you’ll help special cats like me. Whether you adopt from, volunteer with, or donate to Kitten Rescue, they’re great people. And believe me…when a cat says that, you know it has to be true!

We Need Your Help

You can make the world a better place! Make a donation to Kitten Rescue and help a homeless cat or kitten today. Every dollar helps.